LNG – A Fuel In Transition

2021 was a year of dramatic progress and growth for LNG (Liquefied Natural Gas) as a marine fuel and its pathway to decarbonisation. Orders for LNG-fuelled vessels hit record levels while the bunkering infrastructure continued to expand at pace.

There was significant progress on increasing production of bioLNG and renewable synthetic LNG.  LNG vessels will maintain value as shipping moves towards a net-zero future. LNG is indeed a fuel in transition and leading the move to a cleaner future for the deep-sea maritime industry. 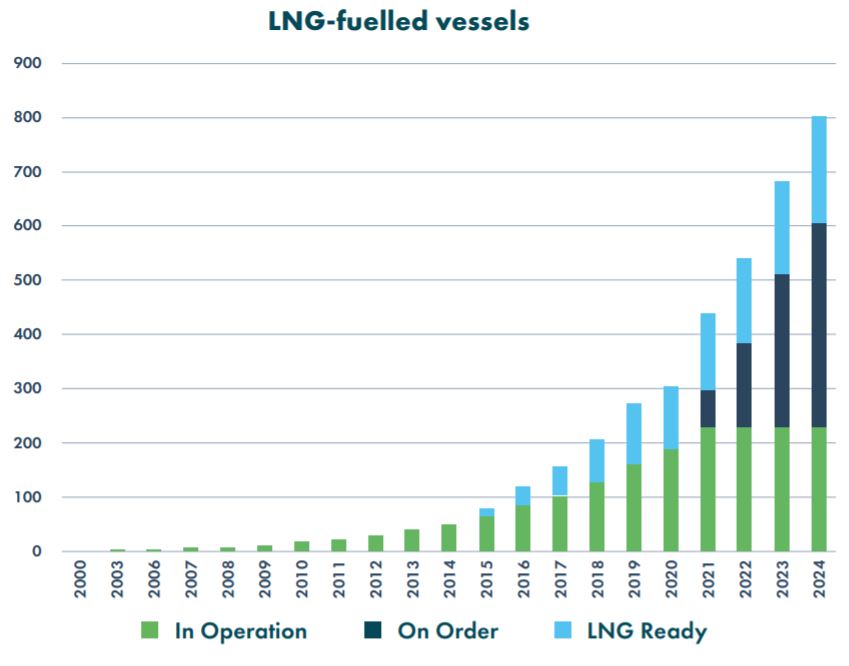 LNG-fuelled newbuilding orders has accelerated dramatically to approach 30% of gross tonnage ordered according to Clarksons. For some segments, such as the ultra-large container vessels which underpin the global trading system, more than 50% of the order book is either LNG-fuelled or LNG-ready.

It is noteworthy that orders for LNG-fuelled container liners increased five-fold since January 2020. It is anticipated that over 90% of the new Pure Car and Truck Carriers (PCTC) that will enter the market in the coming years will be LNG dual fuel (DF). Tankers and bulkers are also following suit, with increases of seven-fold and two-fold, respectively, over the 18-month period. Gibson highlighted that almost a quarter of tanker orders are LNG-fuelled: twenty Very Large Crude Carriers, 41 Aframax/Long Range product tanker and two Suezmax tankers plus forty LNG-ready tankers.

Assets that come online today will be a part of a net-zero shipping future because they will be able to operate on bioLNG and renewable synthetic LNG without costly retrofit.

The rapidly growing order book for LNG-fuelled vessels demonstrates that increasing numbers of ship owners and operators understand that the LNG pathway is clear and well defined.

Given the exponential growth in LNG newbuildings, DNV forecasts that demand for the fuel will triple to more than 3.5m tonnes by 2024. In support of this demand the build-out of LNG bunkering infrastructure continued in 2021.

According to DNV – there are now 33 LNG Bunker Vessel (BV) in operation with a further 42 on order or under discussion. By end of 2022 BVs will be operating in northern Europe, the Mediterranean, USA, Canada, South Korea, Japan, Malaysia, China, Singapore, Brazil and South Africa. Other regions such as Australia are also investing in LNG bunkering.

LNG bunkering is available at 141 ports worldwide. Clarkson forecasts that this will grow to 170 ports in 2022.

TotalEnergies is forecasting that LNG bunkering will represent 10% of global bunkering by the end of the decade.

On the bunker vessel front:
•Shell continues to charter new Bunker Vessel tonnage, including a 20,000 m newbuilding from Avenir.30
•TotalEnergies ran sea trials for its LNG bunkering vessel in Marseille.31
•Norway-based Kanfer Shipping ordered two LNG bunker vessels.32
•Societe Generale facilitated the provision of financing to Pan Ocean for one of the world’s first purpose-built LNG bunkering vessels.33
•Seaspan ordered a bunker vessel for the US West Coast34 and Fratelli Cosulich for operations in the Mediterranean.35
•The largest Articulated Tug and Barge Unit (ATB) ever built in the USA, the Clean Canaveral was delivered to Polaris New Energy by Fincantieri Bay Ship Building. A second ATB of similar size has already been contracted between the two parties.36
•Shell entered an agreement with Crowley Maritime Crop to develop an LNG bunker vessel along the East Coast of the USA.37

All LNG bunkering infrastructure as well as the supporting bulk LNG and natural gas systems can transport, store and deliver bioLNG and renewable synthetic LNG without any modifications and additional investment.